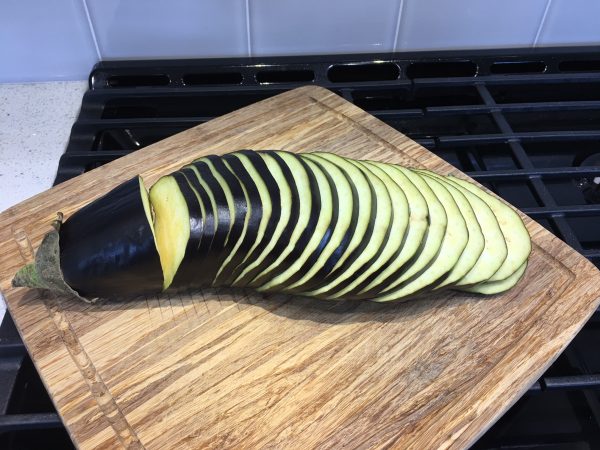 This recipe is from the blog, Delish, with very few changes.

Stacks of yummy eggplant, made smoky with a simple sauce.

Eggplant is not bacon.  However, it CAN taste a lot like bacon if you season and cook it this way!  What are the benefits of eggplant bacon?

Well, it’s made from a vegetable, so you can eat as much as you want without feeling sick and lying on the floor moaning.  Yeah – there’s also the less fat, less sodium, no chemicals, and  more fiber arguments.  So, if you’d like a suggestion of bacon flavor that’s smoky and yummy – then try this:

Honestly, I ate half the pan “sampling” them the first time I made these.  I feel like they make a great side dish just as they are.

I’ve also chopped them up and relied on them to turn a boring salad into a BACONY, SMOKY salad.  I’ve used them in breakfast scrambles, atop soups, mixed with other vegetables, and in a brown rice pasta dish with cauliflower sauce.  Yum!

However you use them, please try this!  It’s kinda mind-blowing, and very easy.

For the original video on the Delish site, click here

Greens, yellow tomatoes and steak salad made even better with chopped eggplant.